The things military members see and experience are unique to them. A civilian will never know what combat is like unless they enter the service, so they may never understand how conditions like PTSD can affect veterans.

Post-traumatic stress disorder was made an official condition in 1980 by the American Psychiatric Association after extensive research. They placed the condition on the DSM-III after researching veterans who returned from the Vietnam War, in addition to sexual trauma victims and others. The APA was able to establish links between the trauma of war and post-military civilian life. When PTSD was first identified as an official condition, there were those who did not take it seriously. Today, it is widely accepted as a condition that military veterans do experience post-service.

It is true that the American military has its own culture, and its members abide by it to the letter. There are things that the public cannot know because it could lead to national security ramifications. The secrecy of the culture causes stress among many members. When you add in the trauma of their experiences in war zones or the pain from injuries received while deployed, it can be a recipe for substance use disorder.

Why Is Veteran Substance Abuse Common?

Substance misuse among veterans is common for a few reasons, including:

The U.S. Department of Veterans Affairs released a report in March 2018 detailing the rates and levels of chronic pain among former military members. The report found that:

It’s important to understand, diagnose and treat chronic pain both for the public and for veterans. Untreated chronic pain is known to cause disability and loss of work productivity. Plus, it increases health care costs. Unrelieved and persistent chronic pain contributes to depression, anxiety and poor sleep patterns as well as decreased quality of life and substance use disorders. Medication is the most common treatment for all chronic pain types. The VA, however, has been actively partnering with other organizations to come up with alternatives to prescription medication.

The push to find alternatives to prescription painkillers, namely opioids, comes after the Centers for Disease Control and Prevention issued new guidelines for opioid prescription. The reasons why these new guidelines were issued is because the United States is experiencing an overdose epidemic that is led by opioids.

The overdose epidemic started around the turn of the millennium. The CDC has determined that the epidemic has undergone three waves.

In the 1990s, pharmaceutical companies developed a more potent painkiller that contained opioids. It is believed that doctors had their concerns about the potency of the new prescriptions but were convinced that there would be no negative impact on patients. Doctors began prescribing them to patients in record numbers, and the medical community did not notice the negative impact opioids were having during the first wave.

The second wave started in 2010. At this point, there were more overdose deaths involving heroin.

The year 2013 marks the third and most dangerous wave of the overdose epidemic. This is when synthetic opioids started to hit the black market, with fentanyl leading the way.

Prescription opioids are used to treat pain, including chronic pain. All opioids activate the opioid receptors found in cells throughout a person’s brain, spinal cord and other organs. When the opioids attach, dopamine is released from the brain to the body. When opioids, or any other drugs, are consumed over a long period of time and in higher doses, the body begins to crave the extra dopamine, which often leads to misuse.

A military veteran who is suffering from a chronic ailment requires help to feel better. They might be out of the military, but they still have responsibilities such as caring for a family or working a new career. The veteran may be the only income earner in the household, which puts added stress on their plate.

PTSD and Substance Use in Veterans

When an active-duty member of the military returns home after serving, they have to readjust back to civilian life. The VA has published several reports that outline how difficult this task proves to be for many.

Some Americans sign up for the military because they do not believe that they have a place in civilian society. Others want to serve and adjust to the military lifestyle. Some of the challenges veterans face are:

A veteran who experiences PTSD and the stress of transitioning to civilian life is a candidate for substance misuse, especially if he or she suffers from chronic pain.

It is estimated that the number of veterans suffering from PTSD is as follows:

In addition, it’s estimated that about 30 out of every 100 Vietnam War veterans have had PTSD in their lifetime.

Signs of PTSD include:

• Thoughts of reliving the traumatic event over and over
• Behavior that avoids people, places or things that trigger memories of the traumatic event
• Intense anxiety of helplessness
• Sudden anger, adrenaline or hypervigilance
• Difficulty sleeping or controlling emotions
• Impulsive or self-destructive behavior
• Suicidal thoughts

PTSD in aging veterans often occurs due to memories of war. The general public has seen what happens in a battle, but military members lived those images. It is believed that PTSD can become worse with age. This is why veterans are encouraged to stay busy or engage in activities that they enjoy, like being in the outdoors.

The Department of Veterans Affairs has conducted studies on the link between PTSD and substance use disorder in military veterans. They found the following:

Which Substances Do Veterans Commonly Abuse?

Substances that veterans are likely to misuse are:

The National Institute on Drug Abuse took a look at the data and made comparisons between active-duty members and veterans. Researchers found that:

Smoking has been common among military members for several decades. A 2015 study found that it had decreased among those in active duty: Only 14% of active-duty members are smokers while only 7% smoke daily. Among veterans, 30% smoke.

Gauging the true rates of substance use disorders, mental health issues and other addiction problems among veterans and even active-duty members is a challenge. There is a zero-tolerance policy of illicit substance use in the military. Therefore, if someone is caught doing something they are not supposed to be doing, it could mean a discharge without any honor.

Finding Help for a Veteran Struggling With PTSD or Substance Abuse

Thanks to research and funding, help for veterans struggling with PTSD or a substance use disorder is far more available today than ever before. Through the VA, veterans can find resources specialized to their needs. There are also publicly funded options for help as well as private ones. A private option for a rehab center is Green Mountain Treatment Center.

Part of the Granite Recovery Centers group of facilities, Green Mountain Treatment Center is located in New Hampshire with a view of the White Mountains. It is secluded, serene and panoramic. A therapeutic backdrop such as this one is beneficial for those who are battling substance use disorder as well as PTSD.

Private, residential rehabilitation programs are worthwhile because they give patients the opportunity to face their trauma in a safe space.

An individualized treatment plan is set up for every person based on an assessment, medical history and other relevant circumstances. This center is gender-separate and adult-oriented. The 12-step curriculum is combined with an evidence-based clinical approach in order to maximize your time at the center.

Patients who require a detox can do so at the center, too. Green Mountain Treatment Center accepts patients with high-to-manageable withdrawal risk. The intensity of a detox and the withdrawal symptoms vary from patient to patient. If you go with this option, you will have a trained staff at your disposal around-the-clock.

Amenities that are offered to patients include:

The point of rehab is to build a foundation that leads to lasting recovery. A staff of able and caring professionals provides you with the tools to make that happen. During your stay, you have the opportunity to:

Additional Resources for Veterans With Substance Use Disorders

You served our country. Now let us serve you.

US Government Made Easy For Veterans 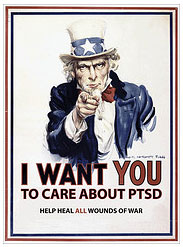 Posttraumatic Stress Disorder can occur following a life-threatening event like military combat, natural disasters, terrorist incidents, serious accidents, or violent personal assaults like rape. Most survivors of trauma return to normal given a little time. However, some people have stress reactions that don't go away on their own, or may even get worse over time. These individuals may develop PTSD.

PTSD is marked by clear physical and psychological symptoms. It often has symptoms like depression, substance abuse, problems of memory and cognition, and other physical and mental health problems. The disorder is also associated with difficulties in social or family life, including occupational instability, marital problems, family discord, and difficulties in parenting.If you are suffering from PTSD, or know someone who is, the following list of resources and information will help you find help in dealing with PTSD and related conditions.

The Department of Defense today announced the opening of a 24-hour outreach center to provide information and referrals to military service members, veterans, their families and others with questions about psychological health and traumatic brain injury. More

All states have a Nursing Facility Medicaid program that provides general health coverage plus coverage for nursing home services. These services include room and board, nursing care, personal care and therapy services.

Nursing Facility Medicaid may pay for a stay in a nursing home if you need a “nursing-home level of care” or meet nursing home “functional eligibility criteria; and have income and assets below certain guidelines.

Below are web-sites that provide information on Veterans benefits and how to file/ask for them.

Board of Veteran's Appeals http://www.va.gov/vbs/bva/

Center for Women Veterans and the U.S. Department of Veterans Affairs www.va.gov/womenvet

For a list of not only the women who gaves their lives in Vietnam but the start of a complete women's casualty list see: They Gave Their Lives

The Vietnam Womens Memorial Project's new website is at: VWMP

You served our country. Now let us serve you.